I wasn’t going to write a ‘look back on 2012’ post since I’m someone who prefers to look forward rather than over my shoulder, but I’ve been enjoying reading other people’s annual summaries on their blogs, so thought I would after all. 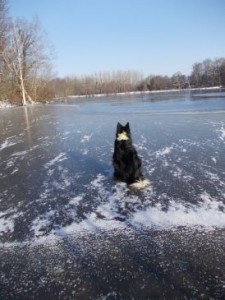 The lakes were frozen for 5 weeks

It’s been a year of extremes – from minus 20 degrees C in February to plus 40 degrees C in August, from summer drought to winter sogginess, and with great highs and miserable lows on the emotional scale too. On the up side Caiti passed her Bac with flying colours, got a place at Bordeaux on the course she wanted and is doing very well. Rors has at last left his uninspiring primary school that he found rather boring and is loving life at collège. Caiti also turned 18, Benj 21 and me 50. None of us had big celebrations – Caiti never quite got round to organising a party, and neither Benj nor I wanted a big knees up. I had lovely friends Pat and Roger round to join a family tea and Benj made do with just Rors, me and Chris for company.

Benj has been unwell since September and that’s put a big dampener on the year. He’s been out of hospital since November, but we still have a way to go. However, bit by bit we’re getting our son back to his normal wonderful self.

It was a tough year work wise – the hospitality trade is never easy at the best of times – but we survived it, just! This year’s obsession amongst guests was parking on the lawn. Never mind that there’s a purpose built, large and blatantly obvious parking area across the driveway, only the lawn would do. We hastily erected some fencing to try and nip this craze in the bud, leaving a car sized gap so folks could back a little way onto the lawn to empty the boot before parking on the proper area. We thought this might be a good compromise. However, they determinedly backed right through to park on the lawn and thus take up space that their children could have been playing on and blocking their own views from the windows. Eye roll.

Animal wise we now have our pigs, three handsome Berkshires. Oberon and Rosamunde are in the process of breeding the next generation for us, and Portia will get her turn in a few weeks’ time. That way we’ll stagger the piglets when they arrive, otherwise we could end up with twenty-four being born at the same time. Brendan the alpaca sneakily fathered half a dozen babies for us born this year – five huarizos (llama-alpaca crosses) and one full-blood alpaca. There’s no mistaking  who Dad is as all the babies are shades of dark brown with Fionn having a few white splotches too.

We did more travelling than we’ve done since moving here. Chris had a night away when he went to his pig management course, and I’ve had five whole nights off the farm – one in Paris when Caiti and I were sussing out a uni up there (on a freezing cold Saturday in January) and four in Bordeaux on the initial visit to the University, the depositing Caiti heartwrenching trip and a subsequent visit to deliver a microwave and do some sightseeing. I’m getting a taste for freedom! We’ve had more family days out than in the past six years and have got our teeth into geocaching which is our main keep fit activity once the cycling season finishes, on top of year-round farming chores of course.

Some fun things were me publishing Heads Above Water in April, building up a second business with Chris and generally enjoying our children and animals, but I’m not saying which we prefer.

I hope 2013 is going to be easier but with some new plans that are brewing in our heads, it’s probably going to be even busier. Here’s wishing you an interesting 2013 too!