It’s been animal heavy morning. First up, we had a chicken invasion. OK, there’s only two of them and they’re generally very well behaved but for some reason they wandered into the kitchen this morning when our backs were turned. (Actually, the reason was probably the open container of cat food on the floor.)

Next up I’m checking the sheep at regular intervals. Little April is 10 days old now and she’s still on her own in the kindergarten. I’m worried Spotty Sheep will explode soon if she doesn’t have her lamb/s. 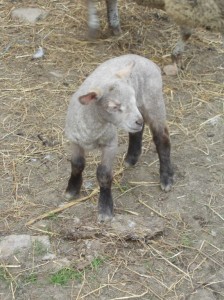 And finally pigs. We’ve got Rosie’s delivery suite and nursery all ready. 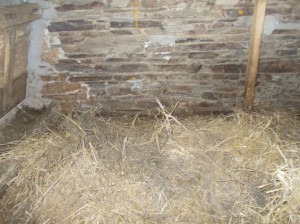 Here’s the creep for the piglets so they can get away from mum to snooze under a heat lamp. One of the male guinea pigs who lives wild was investigating it when I took this photo! 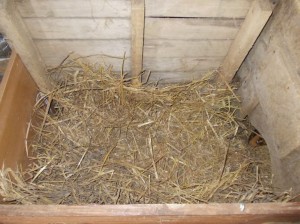 But can we get Rosie to relocate? Nope, nuh-uh, no way. The trouble with getting pigs used to electric fences is that they become extremely distrustful of crossing its boundaries. They’re convinced it’s an invisible force field so even when the gate is opened they won’t come past.

We’ve tempted them with buckets of food and dandelions, but none of them will leave the field. Rosie seems the most timid, hanging around at the back. 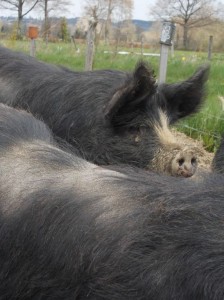 But we’ll persevere. Hunger/greed will overcome their fears in the end and we’ll get her to her stable. Sooner rather than later I hope as she’s a very tubby pig now and the babies won’t be long in arriving.

There’ll be plenty of photos when they do!

Share:
The Mutant Dandelions Are Back! Becoming a Statistic: Bike Theft in France