The first trio to arrive were my dindes rouges des Ardennes (Red Ardennes turkeys). I’ve wanted some of these turkeys for quite a while as they’re such a beautiful red-brown colour. Chris found some on the good old bon coin website and so on a misty day in the school holidays he and I set off to collect them, leaving the boys holding the fort. It was a goodish drive but we hadn’t had an outing in a while and cabin fever was starting to set in. So we were ready to go exploring.

Good old Betty, our bossy satnav, delivered us safely to a large village in Haute Vienne, very like those round here in north-east Creuse. Except there most definitely isn’t a farm in Creuse quite like the one we visited. We were impressed enough when we saw there were llamas, even more impressed when we saw some rheas, but our jaws hit the floor when the farmer showed us into a stable. Inside there were … two HUGE camels! They were amazing. The farmer explained that these had come from Poland and were from eating stock. The fact they’d been bred for meat showed in their size – they were much bigger than any I’ve ever seen in zoos. Luckily these two girls had been spared the pot and were now living happily in this wonderful animal-friendly place. 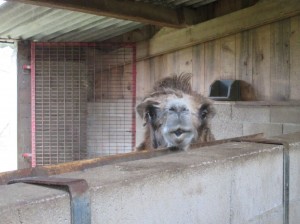 On our way out of the farm we saw some deer with fantastic long, curly horns. Our trip to pick up turkeys proved to be better than an outing to a safari park.

The new turkeys – Ralph, Rebecca and Rachel – were well behaved on the journey home, shell-shocked for the next few days, but have now settled in to life here. They’re still in quarantine but I’ll let them join the main flock in the next week or so.

And here they are. 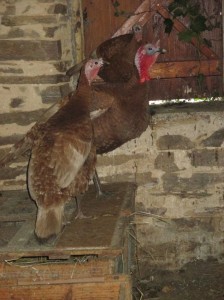 Ralph is now displaying to impress his lady friends and he gobbles every time he hears our black turkey doing the same. 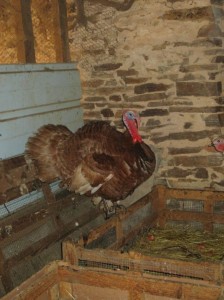 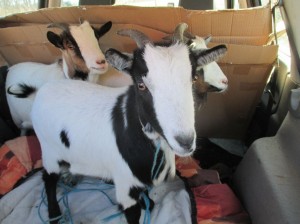 Here they are in the car. They were as good as gold on the journey and have been very well behaved ever since. However, they’re goats, so there will be plenty of mischief to come, I’m sure. 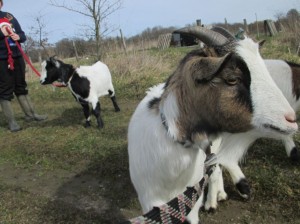 We’re taking them for walks until we have a field ready for them. 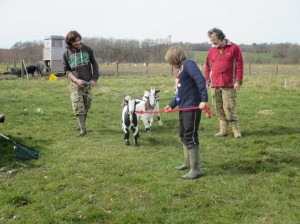 The black and white goat, Louie, is the bravest and friendliest, and quickly made himself at home. Huey and Dewey spent the first day trembling in the corner of the stable but now associate us with food, so we’re rapidly becoming firm friends. They’ll soon be put to work eating brambles and keeping the grass short on areas of sloping land that we can’t use the lawnmower on. I think they’ll enjoy their employment.