It’s a day for animal outings. In fact, it’s been a week of it. Rosie, our pregnant sow, has been on two recent walkabouts. She got out of her field first time and second time she pushed open her stable door, which hadn’t latched properly. It’s never any problem getting her back where she belongs – fortunately! 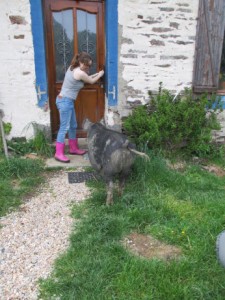 Here’s Caiti making sure Rosie doesn’t go into the house!

Today, finally, Grey Chicken brought her henlings (her duckling foster children) out into the sunshine. Also into incredibly strong winds and heavy showers, but the little ducks seem as pleased as punch to be out. 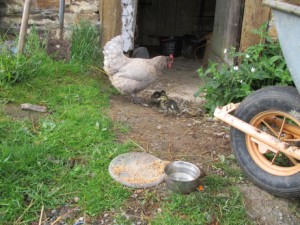 I made them a duck swimming pool but they’ve found a nice muddy puddle which suits them much better. 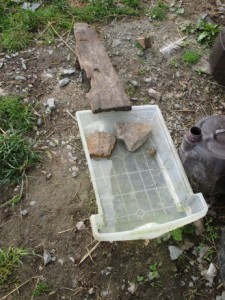 The new batch of turkeys have come through their quarantine/settling in period and are being allowed out for an hour or so at a time. They’re wandering a bit but are quite happy to follow the food lady (me!) whenever she appears to lead them back home.

The three newest chickens are also having very brief wanders. Two of them are completely ditzy so it will be another week or so I think before I can let them potter around all day without them vanishing or proving completely impossible to round up. 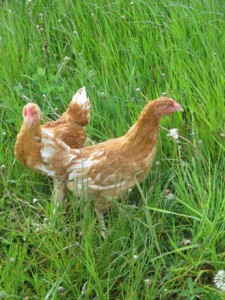 And we spotted this hedgehog pottering around in the polytunnel about a week ago. French for hedgehog is hérisson, and for polytunnel serre. Put them together and we get serrison! (Please be impressed – it’s probably the only French joke I shall ever make up!) Anyway, it turns out she has made a nest under the weed-suppressing cardboard we’d laid down in there, and has at least two babies. So not much will get done in the polytunnel now for a while until they’ve left home! 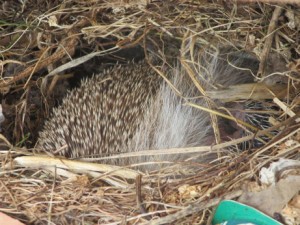 And not forgetting Nessie. She loves going on outings in the car, so today, when the boot was open for a while, she hopped aboard in the hope that we’d take her somewhere interesting. No time for that today I’m afraid! 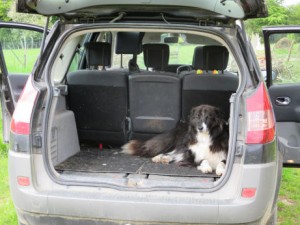