What a day! The promised tempête materialised in the early hours, waking us several times, and was still enthusiastically gusting and raining at 8 am, when it was time to take Rors off to catch the school bus. It definitely was neither cycling nor walking weather, so into the car we got. Chris said he’d come along too in case any branches had been blown down that would need dragging out of the way. I thought this was probably unduly pessimistic, but not for long. As we rounded the first bend in our driveway we came across a lot of branches – all attached to two trees which had been blown down, barricading our way. They had fallen onto the narrowest point between the two upper lakes, so we couldn’t drive round them. We got out to have a look. The extremely tall pine tree on the boundary between our land and Yann’s had been uprooted.

Chris and Rors inspect the roots of the pine tree

As it fell, it had taken down a fairly substantial beech tree with it, and also about a third of the big oak tree. There was an awful lot of cubic footage of timber blocking our path.

Chris reversed back to the house and we bustled in to text the news to Benj and Caits. Rors phoned school to say he wouldn’t be in this morning, and maybe not all day depending on how long it took us to clear the drive. We told Benj to start walking home from Limoges (we were meant to be collecting him on Sunday) and began to make arrangements to get Caits back from the lycée bus. Normally she comes home at lunchtime on Friday and I pick her up at 2. That wasn’t going to happen today! 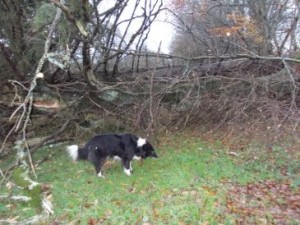 Two massive trunks we've got to saw through! OK, Chris has to.

Once it got a bit lighter, we walked round the estate, clearing the grills for all three lakes as the water was nearly going over the top of them. We’ve been deleafing them every day recently, and just as well as there’s a heck of a lot of water coursing down the slipways at present. There were a few more small trees blown down by the big lake, and a number of branches, but nothing disastrous. We checked all the animals and filled the outdoor guinea pig cages with straw practically to the roof to keep them warm. 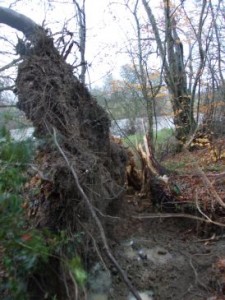 We were about to start chainsawing when the next big wave of tempest swept in so we retreated indoors and hunkered down till early afternoon. Ruadhri’s teacher optimistically rang at 11.30 to ask if he would in for school dinner! I explained that we hadn’t been able to clear our way out yet – there was a lot of tree to move. And then the Berlin Wall blew down – the temporary divider Chris and I rigged up the other week to keep the sheep out of the llama field while allowing them access to the stable. We put it back up in the driving rain, but ten minutes later another strong gust sent it barrelling down the field. I nipped out and lured the sheep into the turkey’s stable. I didn’t want to take the risk of them getting in with the llamas and then pushing through the non-sheep-proof fence at the back into Yann’s large fields. No way was I chasing sheep around in this ghastly weather. Every time we went out we got soaked to the skin within seconds. It was truly grim.

Then suddenly the sun came out, the wind died down and it was beautiful, so it was time to set to work. 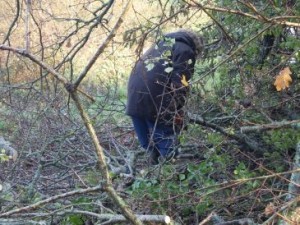 It took a lot of effort but we got it clear in a couple of hours. 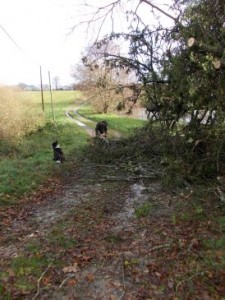 So we can get out and about again now.

Our phone cable has come down up by the gate but is safely on the grass. And the interent is working fine, which is all that matters! I hope it won’t take Telecom five weeks to sort this out like it did the last problem we had with a leany pole.

So, that was our first storm of the season. Plenty more to come I dare say …