What to do? Ruadhri is all for staying home, but with him it’s any excuse not to go to school! He enjoys it OK, but wouldn’t bother going out of choice. It’s true to say that he doesn’t seem to have the most inspiring teacher this year, and he’ll be much happier at Collège in September when he’ll be doing more than copying French off the board or labouring through excruciating ‘magic maths’ sheets.

Caiti doesn’t want to miss school, not so close to her Bac. She’s finally honed down her Uni choices to Bordeaux, Angers, Paris and Limoges, in that order. We only got to see one of those at a JPO, but Limoges she knows from visiting Benj there. Since Limoges is our région’s university, Caiti is guaranteed a place there so long as she gets her Bac, which won’t be an issue. They have to take her whether they want to or not. However, I’m sure she’ll be offered a place by her first choice. She’s not taking any chances though, and is working extremely hard – or at least harder than she was!

And I don’t want either of them to miss their schooling. They’ve missed a few days because of bad weather and teacher strikes, on top of a few days’ illness each, and that’s enough. Besides, I don’t approve of going on strike, although I respect that people have the legal right to do so. What the FCPE is proposing is essentially a strike – a teacher’s strike in reverse. The end result is the same in that the children aren’t receiving a day’s education that they should be getting. I’m against teacher cuts as much as the next person, but I don’t think this is the right way to go about them. Putting forward reasoned arguments, backed up by facts and figures, would be a more constructive and co-operative way of facing the issue. The FCPE is also calling for manifs – manifestations – on Saturday outside the académie (education office) in each département, most of which will be preceded by an opération escargot (go slow i.e. traffic is held up by marchers or a co-ordinated group of motor vehicles driving very slowly). How effective these will be I’m not sure since I’m fairly certain bureaucrats don’t work on Saturdays, so there’ll be no one in the various education offices to witness the protests, and most likely the only people out on the roads will be the ones going to do the protesting! 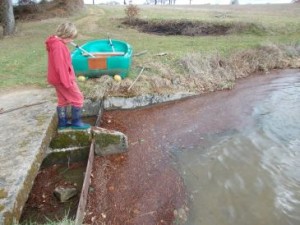 So, it will be école as usual on Monday for the Dagg kids. They’ve had a good weekend to recharge their batteries. We had our frog spotting walk on Saturday evening, on top of a day of bonfires, and today Rors came on our favourite mill walk with me while Caiti went shooting with her Dad. Ruadhri also helped declog the lake grills from the millions of catkins that are currently falling off the trees into the water and washing up there, together with frogs and toads!