Much of urban France is under a layer of smog at the moment. Paris has been particularly hard hit, but many other cities have suffered too. My Bordeaux correspondent, daughter Caiti, reported that her city was smoggy too and public transport was free there last weekend in a bid to keep cars off the road.

No smog here in rural Creuse, so we country dwellers can feel a little smug about that. However, also a little aggrieved. It seems aggravating that city folk have to be tempted to use their abundant and already extremely reasonably-priced and heavily-subsidised public transport by making it completely free. For areas like ours where there is basically no public transport whatsoever, that’s a bit hard to take. I remember seeing on the French news a couple of years ago, when the fuel prices suddenly rocketed, interviews with Parisians at various petrol stations bemoaning the fact that if the price rise continued, then they’d have to start using public transport! They should have been using it already whenever possible. I couldn’t feel sorry for them, I’m afraid.

Whilst French cities seem to be taking plenty of steps to counter pollution and consequently climate change generally, in the form of providing bikes and electric cars for hire on top of their comprehensive public transport systems, they’re up against user apathy and that’s a hard thing to overcome. Perhaps this smog attack will bring the message home that everyone has to do their part to help.

I must mention one remark in an article about the smog Chris came across. It mentioned how the weather conditions meant that the particles of pollution weren’t able to disperse, as they usually did. Disperse over the rest of France presumably! Not a comforting thought…

Here’s a bright spring photo of non-polluted Creuse during a non-polluting bike ride we did at the weekend to finish with. And as to why it’s come out in black and white, I have no idea at all. Chris – help! 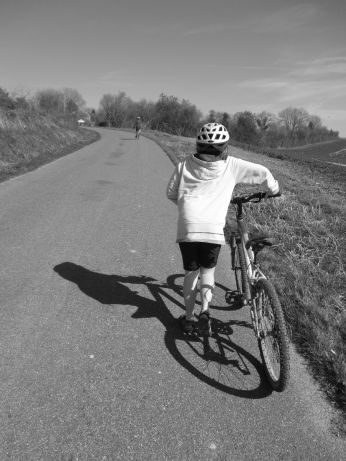