Portia has been going walkabout. She’s escaped twice since yesterday teatime. Actually, ‘escape’ sounds very dramatic, conjuring up images of fleeing animals and hours of exhausting chasing on our part across the Creuse countryside. When our animals get out of their fields, or slip off their tethers, they potter about happily, generally ending up near the house or the other animals. They’re very easy to recapture, with the odd exception of course. Fortunately Portia wasn’t one of these.

I only spotted she was out last night when I was having my evening walk in the gloom. Heading down towards the big lake, I saw the llamas all lined up at their fence, nosily peering at something. I couldn’t see what it was to start with in the dusk. I assumed that a deer had run by or perhaps there was a rabbit or a hedgehog snuffling around on the other side of the fence. Then I made out a pig shape. I turned and jogged back to the house to round up a round up team, and since Rosie was watching me with great interest from the field she shares with her sister. So I quickly deduced that Portia was the escapee.

A bucket of grain and few shouts of “Pig pig”, which always accompanies food, and Portia was trotting towards us as fast as she could. With the bucket held a few centimetres out of snout reach, Chris guided her back into her field. It was dark by now so he got the torch and we checked all the fencing but there was no obvious escape point. We hoped it was a one-off act of wilfulness.

But this morning, Chris popped outside about 8am to count porcine heads, and there was Portia, her head inside the now empty grain bucket! (Fortunately it wasn’t too full to start with.) She was pleased to see us and came up for head tickles, not the slightest bit ashamed.

Since there was no grain left, Chris lured her back into her field with chick crumb which she managed to find room for! 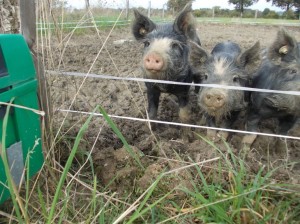 We use electric fence wire to keep our pigs in, and up to now it’s been very successful. Before Portia’s first night-time sortie, the only other escape had been by two piglets and that was when the power supply to their fence wire had been trodden on and broken.

Chris has done some reinforcing where he thinks appropriate but we’re still not sure how she got out. We’re hoping she’s not going to make a habit of it because if so, we’ll have to add a third strand of fence wire. Something else for the ever-growing ‘to do’ list!